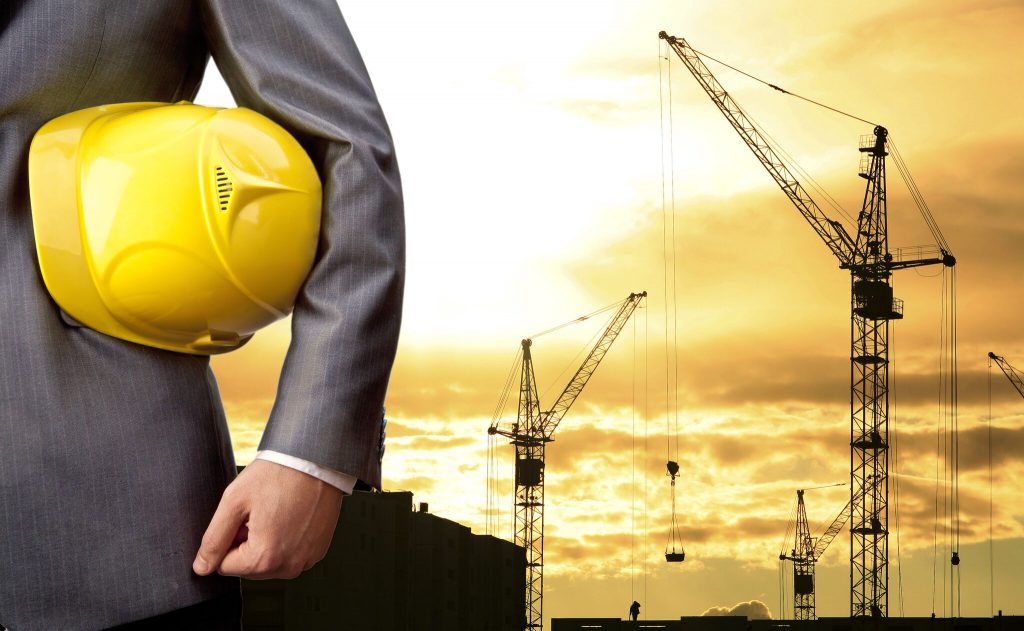 (1) Every chief executive officer shall as far as is reasonably practicable ensure that the duties of his employer as contemplated in this Act, are properly discharged.

These are the appointments of the CEO (16(1)) and subordinate managers (16(2)). Although these appointments on face value may appear simple they can become controversial and contentious in the application from one company to another, bearing in mind that the structures in companies can be totally different.

The illustration infra is a clear indication of how the appointment of a 16(2) can become complex. 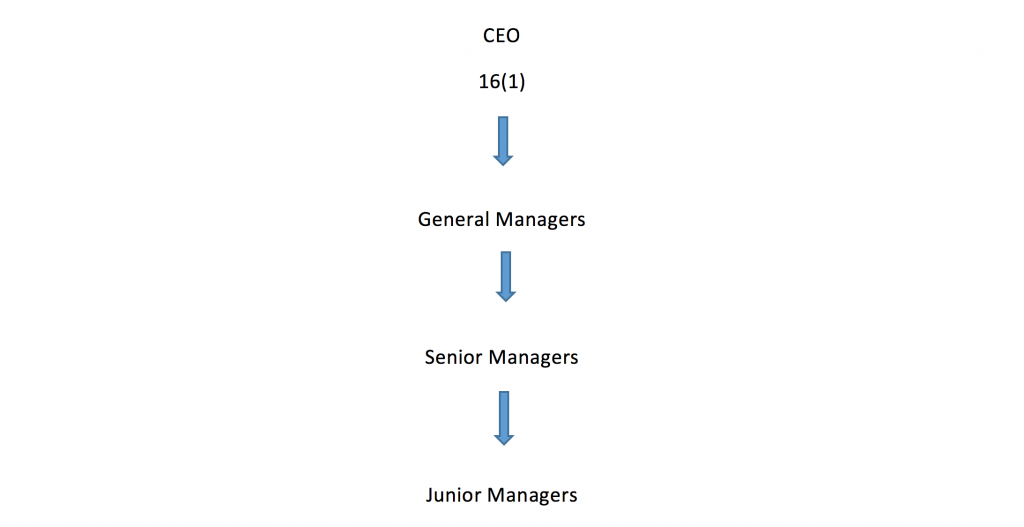 The question is whether the CEO will appoint all these managers as 16(2)’s or will each manager in their capacity as 16(2) appoint the managers they direct and control.

One should never be laborious in one’s approach to legislation and should always ensure that we meet the intent of legislature instead of just the formal requirement in our efforts of legal compliance.

Legislation does not and cannot provide for all scenarios and all possibilities. The OHS Act was promulgated in 1993 before companies became large and complex in their structures and organograms.

There are two approaches to legal interpretation:

If one follows the letter of the law it is not required to appoint any 16(2)’s as the Act doesn’t state the CEO must assign, it states the CEO “…..may assign any duty contemplated to him in the subsection…” It would be foolish for a CEO not to assign duties as that would make him totally responsible for all health & safety duties.

Equally the 16(2) scenario doesn’t always allow for a strict/textual approach.

Where a company has multiple levels of Management one should consider that in terms of common law it is those managers that are regarded as the employer. The legal entity cannot perform functions and therefore appoint natural persons to act on its behalf. These natural persons therefore automatically incur legal liability by virtue of the appointment as manager. Section 8(2)(j) of the OHS Act places a duty on the employer to make employees aware of their scope of authority (duties and responsibilities). This can only be achieved through legal appointment letters. All managers must be appointed as 16(2)’s as they all have inherent roles to play in H & S and they automatically incur liability.

The starting point of any legal appointment is that a person can only appoint someone to assist them in their duties and responsibilities if they direct and control the person they appoint, in other words if that person reports to them directly. This is supported by section 16(2) that states…..”under his control, which person shall act subject to the control and directions of the chief executive officer”. One also has to consider that by appointing someone, the person making the appointment also acknowledges vicarious liability for the actions or lack of actions of the person they appointed. One can certainly not expect the 16(1) to be vicariously liable for those individuals’ actions or lack of actions that he doesn’t direct and control.

Direct used as a verb may also include the following: administer, manage, run, control, govern, conduct, handle;Meer be in charge of, be in control of, be in command of, be the boss of, lead, head, command, rule, preside over, exercise control over, be responsible for, be at the helm of.

Control used as a verb may also include the following: be in charge of, run, be in control of, manage, direct, administer, head, preside over, have authority over, supervise, superintend, oversee, guide, steer.

Following the wide/contextual approach I am of the opinion that objectively approached the intent of legislature with 16(2) legal appointments is to ensure that all managers/all individuals in positions of authority that has a role to play be appointed to take responsibility and liability for the area they control. Subjectively this can only be achieved in large companies with large management structures if one 16(2) is allowed to appoint another 16(2).

The 16(2) will typically be the Project Manager that manages several projects and “floats” around between sites. The Construction Manager (8(1)) will Manage process and health & safety on the site.

Would this mean that further delegation is only allowed in terms of Construction? This makes no sense to me.

Although the appointment of one 16(2) by another 16(2) has never been tested in court I cannot see that any judge will ever make judgement that following the formal requirement (literal approach) is more important that the intent of legislature.

I am aware that the Department of Labour has the view that a 16(2) cannot assign another person as 16(2). In a letter sent from the Department of Labour to a company in which they informed them they the withdraw and exemption to the company in terms of section 16(2) appointments, in their explanation for the withdrawal they indicated that as the Department they don’t have a problem if other people are appointed to assist the 16(1) and 16(2)’s but that they do not agree with the appointment of 16(2)’s that is not under the supervision and direct control of the CEO. This will create a whole new discussion as the question will then be posed what the legal reference for this assignment of duties will be. Auditors conducting OHSAS audits will then identify a non-conformance asking the legal reference under which such appointment is made. There is nothing in the legislation that provides for this. The exemption by the Department was granted to a client for 6 years to appoint as many 16(2)’s as they wanted to accommodate the kind of structure they had. This contention by the Department in itself indicates that they understand that a literal application of section 16 cannot be accommodated in all companies due to different structures.

The matter of interpretation of statute and a purposive approach was confirmed in the recent judgement where the DA approached the court to order President Jacob Zuma to provide reasons for his dismissal of the Minister and Deputy Minister of Finance.

Rule 53 of the Uniform Rules of Court, which governs High Court proceedings, was established to regulate on a national basis the procedure to be followed in cases of all types of review, whether based on statutory or common law.

Judge Bashier Vally said for the last five decades, courts had been able to perform their judicial functions because of rule 53.

However, most of the cases where rule 53 was applied involved a decision or proceedings of an inferior court, a tribunal, a board, or an officer performing judicial, quasi-judicial or administrative functions, and not an executive decision.

President Jacob Zuma relied on this to contend that the provisions of rule 53 did not apply to an application to review his executive decision to reshuffle his Cabinet.

The weakness in Zuma’s case was that he had relied on the literal interpretation of the rule, Judge Bashier Vally said.

Judge Bashier Vally said it was true that rule 53 had not been amended to cater for this, but to decide on its applicability to review executive decisions, it was necessary to subject the rule to a purposive interpretation.

“Relying on the purposive interpretation, there is no logical reason not to utilise it in an application to review and set aside an executive decision.”

If one is adamant about following the literal application of section 16(2) it could certainly be asked that evidence be provided that the appointed person does act subject to the direction and control of the CEO. If this is not the case it will constitute a non-compliance.

It is evident that individuals are selective in their application of a textual and contextual interpretation of legislation. This is evident in the application if section 8(2)(i). The wording of this section does not require a legal appointment. Industry has interpreted it as the legal appointment of a supervisor (8(2)(i)). I have had discussions with OHSAS auditors that don’t allow the a 16(2) to assign to another 16(2), but that do allow 8(2)(i) appointments.

I am aware that some individuals support the argument that one 16(2) cannot appoint another 16(2) based on the delegatus delegare non protest rule. This rule does in fact state that a delegate cannot delegate a function that was delegated to them. This legal principle however finds its origin and application in administrative law that governs administrative matters in the government, and only administrative matters. It is a rule to ensure just and fair administrative justice by government. It is not applicable in this situation.

Based on my explanation above I stand by my opinion.